For the first time in history, four generations—Baby Boomers, Gen Xers, Millennials, and Gen Zers—are co-working together; and as if that weren’t hard enough, they’re doing so in an unprecedented (almost) post-pandemic era. These four generations are being faced with creating the “new normal” of work—not an easy task considering that each of these generation’s view of the world (and work) is conditioned by their particular historical context.

​​Known as the workaholic generation, Boomers were fine working more hours than expected and delivering more work than asked for. Why? #BecauseHistory: Following World War II, the number of children born increased dramatically, making the Baby Boomer generation substantially larger than the Traditionalists (aka The Silent Generation), the generation that preceded them. Conveniently, this population explosion corresponded with a post-war economic boom. But in the early years of the boom, schools were overcrowded, colleges didn’t have enough seats, and competition for starting jobs was intense. As a result, the young Baby Boomers had to compete for resources and success. As a whole, they are very work-centric, hardworking, and motivated by position, perks and prestige (as stated in this article by the Balance Careers). Baby Boomers are known to criticize younger generations for a lack of work ethic and commitment to the workplace.

Gen Xers are what many articles call “the neglected middle child” generation. Currently, workplace rifts (i.e. drama) are between boomers, millennials and Gen Z. Gen Xers barely register. At work, they’re on their own, but this isn’t something new since Gen X was the first generation that experienced both parents working outside the home. This at a time when childcare centers and afterschool programs had not yet emerged to a significant degree. They were the “latch key” generation, often products of divorce, and expected to figure stuff out on their own, and also, never complain.

Perhaps as a reaction to their circumstances, they are the generation that coined the term “whatever” as the answer to everything. Generation X is one that grew up being politically apathetic and in general, “to cool to care.” You can read more about this is this article by Upworthy.

Also known as Gen Yers, millennials grew up on gold stars and participation trophies, and they now make up the largest generational cohort of workers. They generally care about collaboration, teamwork and helping the greater good (very different than the individualistic boomers and the “whatever” Gen Xers). Millennials joined the workforce during and after the 2008 financial crisis, and often felt lucky to land any type of work. Millennials developed and embraced the “hustle” attitude, where jumping to new opportunities was the way to go (while being judged by Boomers and the company-loyal GenXers). More on this in this New York Times article.

Gen Z made their work debut during an unprecedented global pandemic. This generation began their professional work lives without meeting their bosses or colleagues in person; without going through the normal (and also tedious) onboarding process; and without experiencing the pain of coworkers reheating fish in the microwave (what better bonding experience is there than communal complaints over that horrid smell). Personally, it’s hard for me to wrap my brain around this, given that so many key lessons I learned in corporate came from observing others’ behavior. For instance:  I learned that the COO always went to the office cafeteria on Wednesdays at 1:00pm because they had sweet plantains (her favorite). So if I “happened” to be there Wednesday at 1:00pm, I would have a decent chance of bonding with her over our love of plantains and maybe casually run some of my ideas by her before my formal budget presentation. Another example would be when I noticed that Kyle from IT never laughed at Peter’s jokes, but would burst out laughing at anything remotely funny anyone else said (was it distorted sense of humor? Jealousy? Or had he seen some messed-up stuff on Peter’s computer?) And of course, there was Ramona (the President’s Executive Assistant) who could either bump you up in line to speak to her boss, or ban you forever if she didn’t like you. These types of every day interactions  can tell you a lot about how things actually work in any given office and its unofficial (but very real) workplace culture. Unfortunately for Gen Zers, they landed in corporate waters without having this type of social exposure to pick up cues from. There’s no way that Zoom or Teams meetings allows you to decipher the many unwritten corporate rules in the same way.

But then again, why should Gen Zers even care? They entered corporate while the world was literally and figuratively going up in flames and with a rampant deadly virus spreading like wildfire (yes, another fire metaphor) across the globe.

Their work reality was surrounded by fear, death, racial tensions (George Floyd shooting, riots and protests) and a political division incomparable to what other generations ever experienced. And yet companies were demanding more productivity and commitment.

By the same token, it’s easy for Gen Zers to make a huge point out how “insensitive” older generations are and take offense at the slightest perceived offense. But again, if they learned more about how prior generations grew up, and what they had to face, perhaps they could show them some grace before going straight to judging and calling HR.

Each one of these generations comes from a different place, leading them to have very particular needs, motivations, triggers, and sensitivities. It’s very easy to highlight the differences, make fun, or even derogatory jokes about each other, but the truth is, there is an amazing opportunity to leverage the different types of perspectives and knowledge present in today’s workforce. Putting serious thought into creating bilateral mentorship programs could make a big impact. The more we know about each other, the more we understand where we come from as a generation and what leads us to behave in certain ways or prioritize different things, the more we have a shot of building a rich work culture that embraces those differences and allows us to learn from each other’s strengths.

Let’s talk more to each other in an earnest way. Let’s not jump directly into the cliches or easy stereotypes. The 23-year-old can learn a lot from the 60-year-old that yes, may not have savage Excel skills, but may teach them a thing or two about strategy and negotiation.

And the 60-year-old can learn a lot about setting work-life boundaries, about demanding companies do more for their employees, and about doing killer TikTok dances: 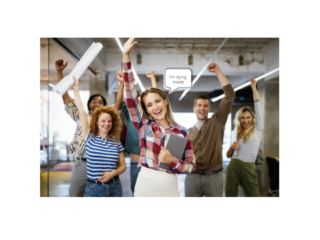