Have you ever fantasized with beating the office printer, throwing your computer to the ground, or yelling in a fit of rage straight into a coworker’s face? If not, what’s wrong with you? Working in corporate requires more than being knowledgeable in your field – it takes high levels of composure, continuous political correctness, emotional containment, and LOTS of fake smiles; all on a daily basis.

What ends up taking the biggest toll in these corporate environments is not the work itself, but the implications that come with every interaction you make. It’s like you’re living a song from The Police:

Every breath you take, every move you make Every bond you break, every step you take, I’ll be watching you.

Every single day, every word you say, every game you play, every night you stay, I’ll be watching you. And if you take one wrong step, I’ll push you down a cliff, b*tch.

(I think that’s how that song ends.) The truth is, in corporate, everything little thing you do is consequential: For example, when Brenda from accounting sends you a hostile email cc’ing your boss and 6 other people, your reply could lead you to be positively noticed by senior management, or it could land you in the HR office with an anger management seminar.  When Kyle from marketing asks you during a meeting, “Um, do you even know what you’re talking about?”, your response to his douchebagness will reflect on your character.

Surfing these unpredictable emotional waves is exhausting, and it can –if not handled well– build a toxic level of frustration and anger. Sometimes taking a massage helps, or watching Netflix’s “Bridgerton” with a bottle of wine, but there comes a point where even that hot Duke can’t make things better.

For moments when things at work have gone too far, and have taken a massive toll on your mental and physical health, an unforeseen rising trend could be the solution.

What Are Rage Rooms ?

Rage rooms are a safe space where people pay to vent their anger by destroying objects in a room.

How Did This Trend Begin?

The first one opened in Japan in 2008, when the country faced major economic decline, according to Vice. Since then, rage rooms have spread across the globe to countries like Serbia, United Kingdom, Hungary, Australia, South Korea and Argentina. In the U.S. there are hundreds of rage rooms, spread across many states, such as New York, California, North and South Carolina, Florida, Tucson, Arizona and Kansas.
Rage rooms provide access to a crappy-looking space (that bear an uncanny resemblance to the locations used in the horror trilogy SAW)

where customers pay to try to let go of their anger. Clients are encouraged to bring all or some -or all- of the following:

(Not that that ever happened to me.)

What Type of People Tend to Frequent These Spaces?

Users have different backgrounds, races, religions, but many of them have in common one thing: they work in corporate. SHOCKER. Young professionals between the ages of 25 and 30 seem to be the ones who frequent these establishments to detox from the stress of work, and surprisingly, it is reported that 75% of rage room customers are female.

All clients can pick out their own music. They can smash away while they listen to Rage Against the Machine, Beastie Boys, Linkin’ Park, or perhaps the soundtrack of Frozen, to get inspired to LET THAT SH*T GO.

Who Are Employees Angry At?

In 2018, staffing firm Accountemps released the results of a study about anger in the workplace that was conducted by several independent research firms. Here are some key takeaways:

52% of employees have gotten visibly angry at work

What Are The Key Triggers?

Jane Burnett, and her 2018 article stated that after interviewing employees in a variety of businesses, the most common answers she received about what caused anger at work were the following:

Desk Rage is a Thing

When these types of frustrations happen continuously they can lead to “desk rage,” which can be manifested by screaming, cursing, trashing office equipment, or assaulting others. In an article published in Leading Higher, intense frustration is frequently experienced on the job and displayed in the following ways:

Back when I was creative manager of a cable network in Latin America, Tom Cruise came into the main office and threw a chair out the window. Ok, not exactly, but it’s not too far off: My team was dealing with high levels of desk anger (and they had every right to.) The company had acquired an additional network, and suddenly it had to accommodate 40 new employees. Until they could buy additional office space, they decided on a “temporary fix,” moving my creative team from our fancy, modern space on the 6th floor, to the 10th floor, where joy went to die. Everything about this place was awful: the furniture seemed to have been purchased at a yard sale (some of the chairs had faulty wheels or broken arm rests,) and we had to share a gas station-like bathroom with employees from a supermarket that was on the ground floor of the building. They were nice people, but some of them happened to be fans of washing their hair and shaving their legs in the sink. No joke.

We were officially the bastard children of the company. And not the cool kind of bastard kid like Jon Snow in Game of Thrones.

Senior management thought that sending the creative team to the 10th floor would be fine because “they would find humor in the situation.” We didn’t. As the manager, I was in a weird position, because even though I agreed that the situation was outrageous, I couldn’t chime in to trash talk the company with the team (at least not as much as I would have liked to.)

One morning that first week, I heard a huge crashing noise. I darted into the creative team’ room, and people had an “Oh shit!” look on their faces. I spotted a chair turned upside down on the floor, with one of its wheels detached and rolling away to the end of the room. A young producer, let’s call her Talulah, was red, sweaty, and hyperventilating ––she was the embodiment of rage.

– “I am now after smashing that piece of defective junk,” she said. “Maybe this way they’ll get me a chair that isn’t broken.”

Eventually Talulah calmed down and we all had a chat about how shitty things were, and what the appropriate ways to manifest discontent were. “You’re creative producers. Find a creative way to manifest what you’re feeling,” I told them.

The Birth of “The Wall of Sorrow”

The next day, I came into the office and someone on the team said, “What do you think?” I looked around to find that the entry wall was covered with black and white pictures. Upon closer inspection, I realized that they were photocopies of each of the team member’s faces, with looks of anguish and despair. “We call it The ‘Wall of Sorrow.’ Do you like it?”  he said, testing me. I paused, looked once again at the wall, and then turned and walked into the next room.  After a minute or two, I came out, walked to the mural, and added my photocopied, gargoyle-looking face to the mural, acknowledging their frustration, and adding artistic value at the same time. Soon after, I summoned senior management to the 10th floor for the world-wide art exhibition of The Wall of Sorrow.

This stunt didn’t persuade senior management to move us back to the 6th floor, but at least the team felt seen. We stayed in that hell hole there for another year (no amount of therapy will be enough to recover.)

In addition to dark and depressive art murals, desk rage can appear as a slow boil that leads to gossiping at the water cooler, backstabbing, poor productivity, abusing sick days, stealing supplies or becoming irritable or depressed, and if these behaviors aren’t addressed quickly, they can escalate and spread (like a rumor of a secret affair between two coworkers.)

The Future of Team Buildings

Perhaps rage rooms can provide a safe outlet to these feelings and provide a cathartic experience.  As a former corporate SVP that’s seen her share of non-ecstatic employees, I think rage rooms can be a memorable team building activity. Instead of having those typical off-sites where people are expected to bond by doing cliché trust falls, how about building cohesion through a “Team Building Smash Bash”? Not only is there lots of exercise involved in smashing things, (which makes endorphin levels kick and produce feelings of happiness and euphoria,) but also there’s the beauty of a common team goal of…beating the sh*t out of stuff. Add a few beers post-smash beers to the experience and I guarantee you that employees will remember this day forever. However, although rage rooms seem to be the “it” thing, some mental health professionals doubt that this is an effective way of expressing anger, and clearly rage rooms should not substitute professional help. (Yes, I’m adding this to avoid potentially getting sued.)

These stress-relieving establishments provide many packages and prices, from “Anger Management” sessions that start  at $35 for a 10-minute session, to  BYOB (Bring Your Own Breakables,) to “Overkill” packages that last 65 minutes, at $424,96.  The Anger Room in Texas has a special package that allows you to recreate a work space for $500. They also have an “Office Space” package, that provides a satisfying experience of re-enacting a scene from the movie “Office Space.”

Hopefully you’re the type of person who brushes off animosity, moves forward quickly, and doesn’t get stuck with petty resentments. If not, and you’re interested in trying this new trend, here’s a playlist for your upcoming smashing session: 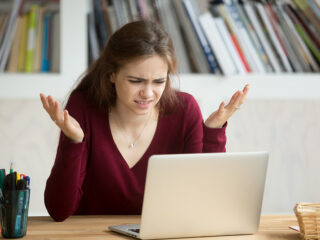 Next Post (n) The Hidden Meaning of Corporate Emails