CEOs are the rock stars of the corporate world – the ones who walk confidently into a room with a subtle, yet firm rushed mode that says, “I am busy and important. Don’t waste my time.” They love to hear everyone hush as they walk in a room, and they enjoy watching people scramble to change seats in order for the CEO to have the best possible place at the table. While all this is happening, the CEO will likely throw in a fake humble phrase, like “Oh, please, that’s really not necessary.” But do not be fooled – IT IS NECESSARY. (Just sit in a CEO’s favorite chair and watch your corporate career fade like Kevin Spacey’s acting career.)

While researching the psychological profile of CEOs, I found a fascinating FORBES article, that begins with this quote:

As I read the article, so many things began to make sense: I started putting together the pieces of puzzling experiences I’d had alongside different CEOs over the years. It was quite the emotional roller coaster. On the one hand, I’d be thrilled to be on the ride and witness their confidence and strategic thinking up close. On the other hand, just like roller coasters, some of those weird twists and turns they made just made we want to puke. Some days the CEOs would be inspiring and share an amazing vision for the future; and the next day, that same person would be capable of firing a single mother of 4, with cancer, and who had recently been hit by a car, without batting an eyelash. (Yes, that’s an exaggeration, but you get the point.)

Oftentimes, there was little to no guilt while executing really hard decisions regarding the livelihood of employees, which I found truly baffling. During my long career in corporate, I had to fire or lay-off many employees, and even when I thought it was warranted, it was always hard for me to do. I lost sleep; I felt physically ill.

“People with psychopathy crave power and dominant positions, experts say. But they are also chameleons, able to disguise their ruthlessness and antisocial behavior under the veneer of charm and eloquence (…)”

On a similar note, Karen Landay, a Ph.D. candidate in business management at University of Alabama, says that lack of empathy is also a hallmark trait of our friendly psychopaths.

“They don’t care that they are hurting you. They will do what they have to do,”

One route to grabbing power for the highly intelligent psychopath, as stated in the Forbes article, is to climb the corporate ladder. This makes total sense –in these high-power roles, being “emotional” or caring is seen as a weakness. Viewing people as more than a tool to produce money is not rewarded. This explains how some CEOs can make really hard decisions -like laying off hundreds of people whose lives are being ruined- while savoring a bite of their favorite turkey sandwich. Or how they can effortlessly have HR fire someone who’s worked for the company 20 years, just because “there’s just something about her I don’t like.”

To the psycho CEO, the only thing that matters is the bottom line, because that’s what leads to power, and power feeds the CEO’s self-grandiose image.

In an article by The Harvard Business Review, Garinder Morse describes psychopathic executives (who are on their way up the CEO ladder) as

Um, what? This sounds like that plot of a David Fincher movie starring Joaquin Phoenix as the aspiring CEO who takes down everyone in his path to the top. Lawrence Fishburne plays his therapist, who happens to be –SPOILER ALERT– ALSO a psychopath. Despite their efforts to “conquer corporate,” the other aspiring candidate, Anne Hathaway, ends up being promoted to CEO due to her intellect, perseverance, and her ethics code. That is, until at the very last minute when she collapses and dies, leaving us to wonder if it was due to an underlying health issues, or if she was taken out by Joaquin’s psycho CEO.

Regardless of your judgement of my objectively brilliant movie plot for Devil Wears Prada, Part II, the reality is that psycho CEOs are a nefarious presence in the workplace.

“Psychopaths or people with psychopathic traits thrive in chaos and know that others don’t, so they will often create chaos at work for this reason,” says Tara Swart, a neuroscientist and faculty member at the MIT Sloan School of Management.

Personally, I can recall several occasions in which certain senior leaders would create a state of panic out of nowhere. One minute, things were fine, and the next it seemed like we were facing a horrendous crisis that came out of the blue, and people were suddenly turning against each other. It was very confusing and stressful, and it is only now that I understand that this was probably all orchestrated.

How Many Are Lurking Among Us?

Roughly 4% to as high as 12% of CEOs exhibit psychopathic traits. According to some expert estimates, CEOs tend to be psychopaths many times more than 1% found in the general population. So, chances are, at some point you might work for a psycho CEO (or maybe you already did or currently do). Hopefully, reading this will help you make sense of those f*cked up actions that seemed perplexing at the time.

You can’t choose your boss, and you can’t always quit a job. If you’re stuck with a psycho boss, my advice is to absorb what’s good about them: like the fact that they tend to be smart and politically savvy. Having said this, never admire their lack of decent behavior.

I believe that slowly but surely these behaviors will be less and less revered as we move into a workforce now driven by millennials, and Gen Zs. It seems like these generations believe more in working with purpose and in work-life balance than in money for the sake of money. Unlimited greed will no longer be the driving force in corporate America. (Lots of greed? Yes, I mean, America is no selfless Greta Thunberg, but definitely not to the scale of the last 30 years.)

The world will be a much better place when psycho qualities aren’t the ones being rewarded in corporate life. More than ever, we need leaders with empathy who value employees and ethics over their own ego. We need to set a new standard for what being a star CEO means. Let’s make psycho CEOs and their *sshole actions (like Succession’s Logan Roy and his humiliating “boar on the floor” offsite tactics) become behaviors from the past that are no longer tolerated; like smoking while pregnant, or, wearing crocs.

I think we met at a networking event back in 2018 but who knows. https://t.co/RCpkzMy3L3 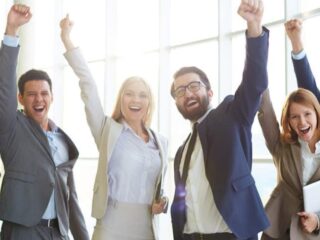 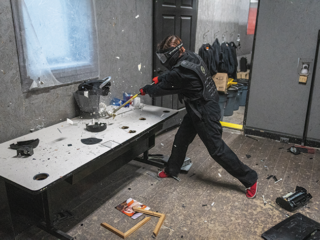