The first several weeks working at a new corporation are full of hope, positivity and high expectations for a bright future, full of benefits and 401k savings. You’re beginning a potentially long-term relationship, and you sincerely want to give it your all. But, if there’s anything that romantic comedies have taught us, it’s that relationships are messy, and nothing is as simple as it seems in the beginning.  Here are a few things you can expect to happen in the early days of a new corporate relationship:

Upon your arrival, the Human Resources people are extremely nice, warm, welcoming, and they’re  full of [fake] enthusiasm about your joining the company. After you sign all the horrendously long and tedious paperwork (an experience that will at least prep you for difficult life moments like a prenup, or divorce), the overly nice HR person sends you to orientation.

In a room with dimmed lights you’re shown a corporate video that says how INCREDIBLY AMAZING the company you’re joining is, and how important employees are to its success. And now YOU are a part of this! Lucky you! The video usually has emotional music with extremely cliché words such as:

The video also will likely feature a lot of cheesy, royalty-free corporate stock images of smiling employees. Of course, the people featured are of all races, genders and ages in order to assure newcomers that they are joining a highly diverse and inclusive workplace (but mostly, to not get sued for discrimination.)

Even though deep down you know all that’s pretty much BS, you’re still all pumped up, like this picture you just saw at the end of the video:

Who knows? Maybe this place IS different! Maybe you’ve actually found THE ONE. After orientation is over, the HR person smiles, accompanies you to your new workspace, and once your new boss arrives, kindly wishes you well and leaves (while shining a sinister smile and whispering under his/her breath: “let the games begin”).

During those first few days (and even weeks), you will likely be the target of exaggerated kindness: from your boss, coworkers, employees (if you’re a boss), and pretty much most everyone you encounter in the hallways or at meetings. But for some reason, behind that cheerfulness and acceptance, you suspect something is off, like a corporate version of Jordan Peel’s hit horror movie, Get Out.

But truth be told, during these first weeks, you are also guilty of trying to appear be extra decent. Your face is on the verge of collapse due to all that smiling, and you’re exhausted from constantly going out of your way to be way nicer than you really are. (Who knows, maybe you’re the batshit crazy one who will terrorize them!)

In any case, the goal in this initial and crucial phase is to strike a balance between coming across as confident and intelligent, as well as humble, down to earth, and approachable. (No sweat.) The Corporate Honeymoon is far from sweet and romantic, but you can get through it by following these simple guidelines:

First impressions at work can change dramatically. When shit hits the fan, true colors tend to surface, and many times those colors ain’t pretty! Just like in Game of Thrones, people who start off as sweet and innocent can turn into cold-blooded assassins; people who seemed evil in the beginning may end up totally saving your ass (shout out to Melisandre); and others are evil from the very beginning and stay evil until the very end (sadly there are Cersei Lannisters in the corporate world.) Ultimately, everyone is playing the game to see who gets the closest to the Corporate Iron Throne (without getting murdered along the way.)

The photoshopped nails and earrings are a nice touch @misscorporate_ https://t.co/Oc8ySg9GsM

RT @DianneBancroft: Don’t know who did this but they need an award https://t.co/y6isDFDrLc

Ya gotta watch out for quiet accountants https://t.co/96Lht4JeS9 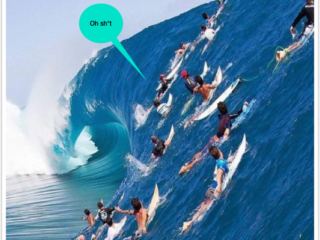 Next Post (n) THE TRUE MEANING BEHIND DAZZLING JOB POSTS